It’s amazing how quickly time flies when you’re having fun. (Or as one frog said to another, “time sure is fun when you’re having flies.”) Our two week adventure was drawing to a close. But as far as sightseeing, Beijing was the just the beginning. When we landed on Monday morning, we dropped our luggage at our hotel and went to explore the Forbidden City. 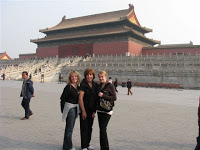 Construction of this architectural wonder began in 1406 by Emperor Yongle of the Ming Dynasty. The Forbidden City is the world’s largest palace covering 720,000 square meters with 9999 buildings and required an estimated 1 million laborers and 100,000 craftsmen over 15 years to build it. Created for the Emperor and his wives and thousands of concubines, the Forbidden City was the center of Chinese government for hundreds of years. We only had a couple of hours before the site closed, so we hired a tour guide named Michael. He gave us a brief, but fascinating taste of China’s history and what went on behind these scarlet walls.

After the tour, we crossed a busy street to Tiananmen Square to watch the lowering of the flag ceremony. We were surrounded by hundreds of Chinese tourists who had traveled from outlying areas to see this most hallowed place – the heart of China, Michael called it. We had planned to meet a friend of Jessica’s boyfriend, an Iraqi foreign-exchange student named Wassam. Unfortunately, we didn’t realize the square would be packed for the ceremony at 6:00 pm.

Though we had his phone number, we didn’t have a cell phone. So, I attempted to borrow one. Easier said then done, however, for no one in the square seemed to speak English. Finally I found a young woman and between sign language and pointing to her phone and the number Jessica had written in a little notebook, she agreed to call the number. But the unfamiliar English was difficult for the young woman to read.

By then a crowd of about 30-40 people had gathered around to see what the beautiful blonde girl and her aging mother were attempting to do. All day, Jessica had had people trying to have their picture taken with her. My sister Linda got quite a kick out of watching people stand behind Jessica as she talked on the phone, pointing at her hair as their friend took a picture.

Ten minutes later, we were finally united with Wassam. And after twenty minutes looking for a cab, we finally caught one to his favorite restaurant. It was a crazy wonderful day and a great Beijing beginning.