I did it! I finally did it.

I climbed a mountain and accomplished my summer goal. Well, sort of.

Technically I did not summit a peak, not this year. But you know what? It’s okay. At least I attempted the climb. And wow, the amazing things I learned in the process.

I’d hoped to climb St. Mary’s Peak down in Montana’s Bitterroot Valley with a friend, but our schedules never meshed and so I comforted myself with the thought that I’d climb Big Mountain here in Whitefish. But you know how fast summer goes and suddenly it was September and then October, and I feared I wouldn’t accomplish that strangely insistent goal I’d set last spring. Especially when God had us pack up and leave the valley the first of October.

But oh, the kindness of the Lord who not only delights in fulfilling our desires, but also delights in birthing them in our hearts in the first place…
And a strange desire it was. I’ve never been the outdoorsy type. I’m a Montana girl, born and raised. But for the most part, I’m a Montana girl who is very grateful God created malls. The fact that I even wanted to climb a mountain surprised us all. Especially my husband.

“Don’t you think you should start training if you want to climb a mountain?” my husband suggested carefully. Sure, I suppose that would be wise, I agreed. But somehow I never quite got around to it.

So today, when I finally decided to brave the climb, I can’t say I was well prepared. But the day was glorious. The sun shone bright above as the aspen and tamarack blazed golden across the slope above me. I had my bottle of water, a banana and my Ipod. What more could a woman need? 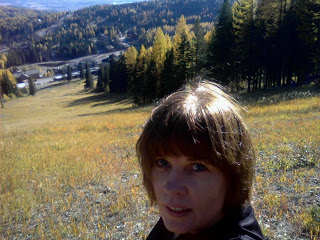 Oxygen, evidently. In a swashbuckling attempt to find the trail on my own rather than wasting time trying to find the trailhead, I headed up hill boldly, on a zigzag with what I thought was a reasonable incline. After all, I’m aware of my limits.

But the trail I expected to cross didn’t make its appearance as soon as I’d hoped. Gasping for air, I forced myself up, walking side hill across the matted grass, trying to avoid the jumbled rocks that littered the slope. Every once in a while I’d stop to catch my breath as I desperately scanned the slope above me. Where was that trail?

Perhaps this was high enough, I reasoned as I looked back down across the valley, chest heaving, my body trying to negotiate a peace treaty with my resolve. After all, it was a start and a start after all was a start and shouldn’t that be good enough for me? 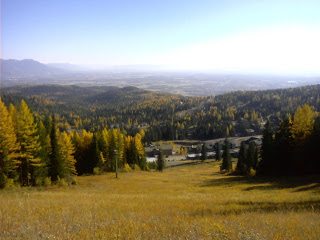 But God had some lessons to teach me this glorious autumn day, and I wouldn’t learn them by giving up. So, uncharacteristically, I put one foot in front of the other and pressed on. Oh, I am so glad I did!

I’ll tell you more about it in the next post. But let me ask you a question…What are you facing in your life right now that leaves you breathless and your flesh shouting for you to abandon the upward climb? Rather than giving in and giving up, I suggest you stop a moment and catch your breath. Go ahead and look at where you need to go. I know the task feels daunting and there are a thousand reasons why it would be easier to give up. Even abandon your faith. But before you give in to despair, I want you to look back at how far you’ve come and at the steps that brought you to where you stand today.