A holy moment on holy ground…

As I followed the trail upward, it became clear that I wouldn’t make it to the summit. I’d started late in the day and the sun was slowly lowering itself in the west. But my heart was so filled with joy. As praise music from my Ipod filled my ear, I realized that the beauty and the majesty that spread out below me made my goal of climbing a mountain completely secondary. It was enough that I had tried. 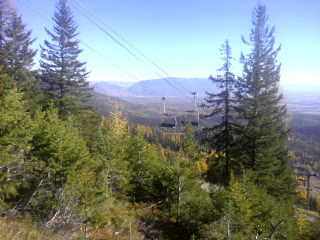 The trail I’d followed up the mountain snaked below a ski lift called Chair Two, and I could see that the top of that lift was just a little ways above me. Not the goal I’d hoped for, but a goal none the less. I would summit a peak, though it was only a peak set below yet a higher peak. I stopped on the trail and took out my camera phone and began to take pictures as I turned in a 360* loop praising the Lord for the beauty surrounding me and for helping me fulfill yet another desire of my heart. 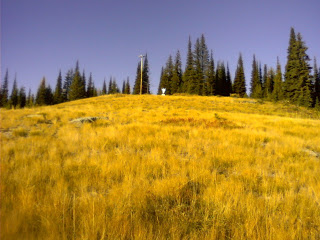 I saw a flash of white as I circled, but it wasn’t until I put down the camera that I realized what it was. There on a nob just above me, the summit as it were, stood a statue of Jesus with arms lifted high looking out over the valley. I’d skied by the unusual landmark during the winter, but I had completely forgotten that it stood at the top of Chair Two. My heart began to swell at the thought of Christ, right there, just as present in the natural as He’d been in spirit during the climb.

I’d had a goal in mind, but God had given so much more. For He wanted to give me more than a destination. He wanted to give me a revelation of Himself. A holy moment on holy ground meant just for me. A pilgrimage that started with a simple journey. A crazy, not-at-all-like-me desire to climb a mountain.

I never dreamed that when I did, I’d end up walking straight into the arms of Jesus. 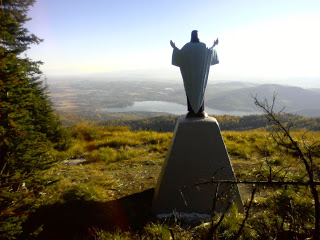