Note from Joanna:  So pleased to have my friend and assistant Angela Howard guest posting again today!  You can find out more about her at the end of this post.

Pulling out of the parking lot at my church I had a flashback to the early years of my marriage.  I remembered walking with my sister through that same parking lot crying.  I had lost hope that things would ever change between Michael and me.  “If this is how it is going to be then I wish God would just tell me and I will try to get used to it,” I remember saying.  I was tired.  Tired of trying.  Tired of hoping.  Tired of striving.

I’m sure that many of you have been that desperate as well.  You are struggling in relationships or circumstances which are beyond your capacity to change.  Maybe you have recognized that it is you who needs the transformation and that seems equally impossible.

I was encouraged this week as I read THRU THE WORD in Acts 26-27.  Here we find Paul sharing his story:

“I used to believe that I ought to do everything I could to oppose the very name of Jesus the Nazarene.  Indeed, I did just that in Jerusalem. Authorized by the leading priests, I caused many believers there to be sent to prison. And I cast my vote against them when they were condemned to death.  Many times I had them punished in the synagogues to get them to curse Jesus. I was so violently opposed to them that I even chased them down in foreign cities.” Acts 26:9-11 (NLT)

Paul did everything he could to fight against the cause of Christ.  You didn’t have to wonder which side of the debate he was on; he was well-known as a violent murderer of anyone who claimed to be following Jesus.  He seems like a lost cause, right?

It certainly appeared that way, until he had an encounter with the power of God.  Paul recounts the story here:

“About noon, Your Majesty, as I was on the road, a light from heaven brighter than the sun shone down on me and my companions.  We all fell down, and I heard a voice saying to me in Aramaic, Saul, Saul, why are you persecuting me? It is useless for you to fight against my will.

“And the Lord replied, ‘I am Jesus, the one you are persecuting. Now get to your feet! For I have appeared to you to appoint you as my servant and witness. You are to tell the world what you have seen and what I will show you in the future. And I will rescue you from both your own people and the Gentiles. Yes, I am sending you to the Gentiles to open their eyes, so they may turn from darkness to light and from the power of Satan to God. Then they will receive forgiveness for their sins and be given a place among God’s people, who are set apart by faith in me.’  Acts 26:13-18 (NLT)

I’m sure that most people had given up on Paul, just like I had felt like giving up on Michael at times.  But God never gives up on us:  His love is perfect and His power changes us, sustains us, and heals us.

I’m so glad that I didn’t give up hoping for my marriage and I’m so glad I have a God who is more than able to change me!

Have you been close to giving up on others, on God or on yourself?  What are you choosing to place in God’s hands today? 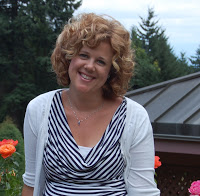 Angela is an inspirational and educational speaker who teaches the hard truths of God’s Word in a fun and relevant way. She is also a writing assistant to Joanna Weaver, author of Having a Mary Heart in a Martha World. Whatever she is doing, she has a passion to see spiritual growth and an increased sense of purpose in people’s lives. Angela and her husband Michael graduated from Northwest University in 1997 and have been married for 17 years and have 2 children. They currently live in Washington State.

You can follow her on her blog at No Ordinary Days.