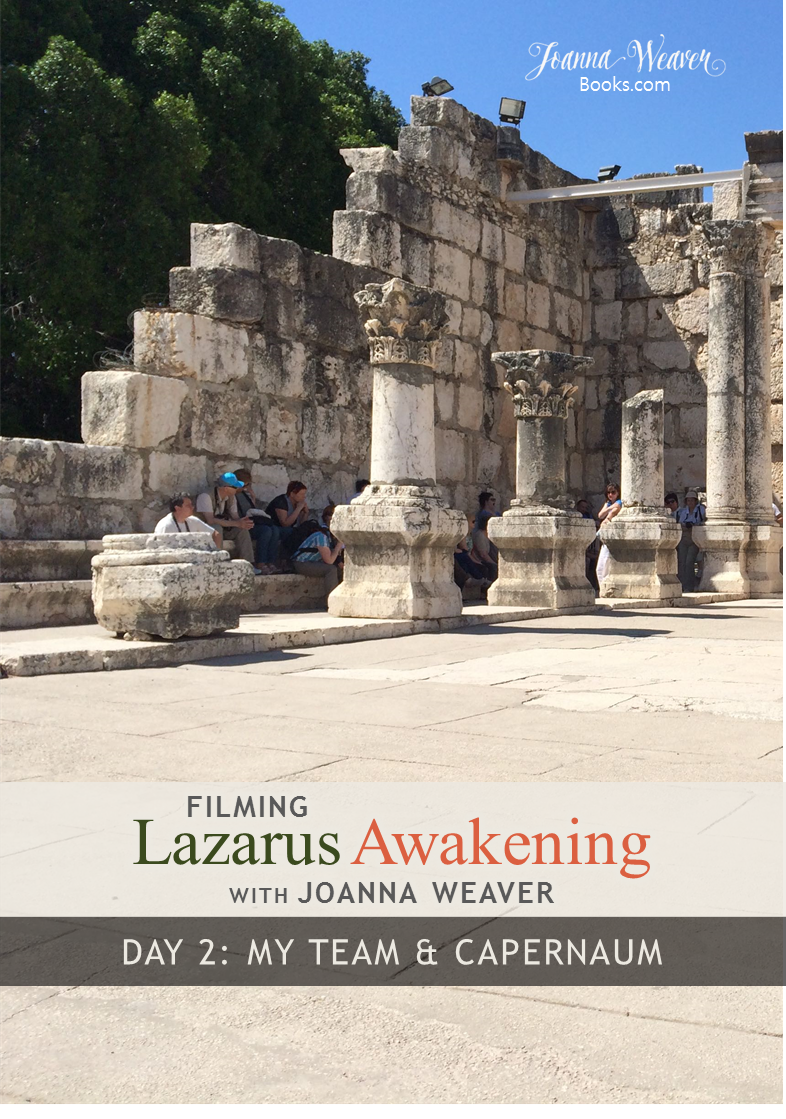 It took me a little while to remember where I was.
But as I rolled over to turn off my alarm and looked around the lovely Ein Gev Holiday Resort cottage where I’d spent the night, it hit me. We were really here – in Israel! Staying at a kibbutz on the eastern shore of the Sea of Galilee.

A mixture of excitement and nerves bubbled up together as I thought about what lay ahead…today was the very first day of the Lazarus Awakening video shoot and we were going to  Capernaum, one of my favorite places in Israel!

The night before, Kristie and I had returned to the Ben Gurion airport to pick up Frank and Amber as well as our rental van. Mikki Abitbol, our tour-company hostess, was there to meet us. She’d be our go-to girl for the trip.  This vibrant 70-plus-year-old Jewish grandma had spent most of her life in New York before immigrating to Israel. Fluent in Hebrew and Arabic, she had a wonderful sense of humor. In other words, a perfect fit for our team!

Breakfast on the Seashore

That next morning at the resort, we met for a delicious breakfast and went over our plan for the day. There was a lot to accomplish: a bonus segment to be filmed at the water’s edge, and an entire teaching session to be shot at Capernaum, 14 miles away.

I had to smile as I looked around the table at my team. We’d been together for nearly two years and this was our third and final project. My heart swelled a bit as I considered these people who’d become so precious to me. Their commitment to excellence had made the DVD studies beyond anything I’d ever dreamed of. But it was their willingness to go the extra mile that had made it possible to film Lazarus Awakening in Israel. 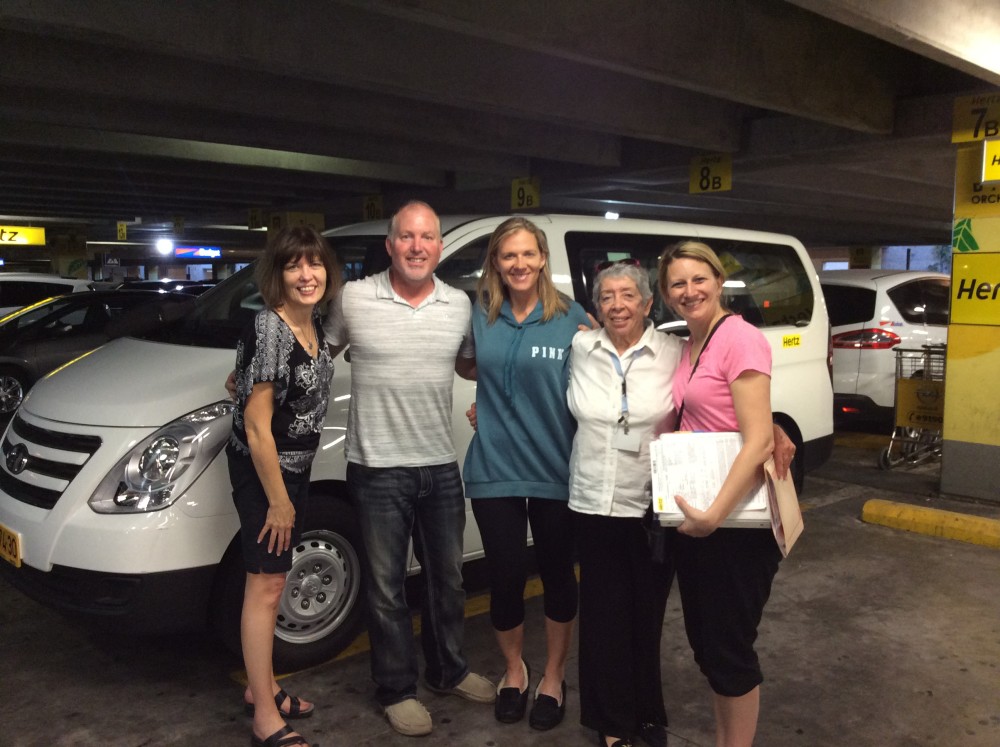 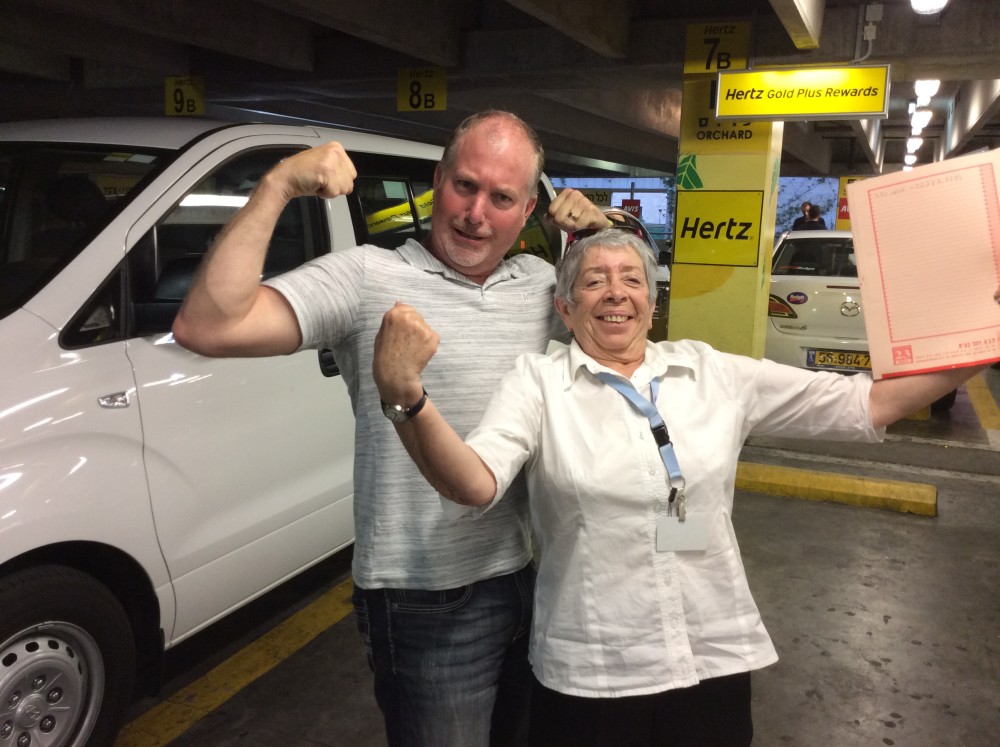 Frank and Mikki deciding who’s going to be in charge!

Here’s a little bit about my production team…

Frank Gamble. What can I say about this man? Imagine the Energizer Bunny but add a massive amount of creativity and skill in every aspect of video production. From shooting video to editing and graphics, the man is simply amazing. (Tears well up as I write this description. I have been blessed.)

Amber Gamble works seamlessly with her husband, plus they have a lot of experience doing it! She’d been with us on the first Having a Mary Heart in a Martha World project and it was wonderful having her back with us in Israel. Amber has mad skills on the teleprompter and is great at catching misspeaks. Best of all, she’d help me with my false eyelashes!

Kristie Kerr is a sweet gift to me! I’ve been blessed by her creativity and skill in producing DVD studies, but her spiritual support has meant the most. Speaking words of encouragement and insight. Praying over me until hopelessness and helplessness lifts, and cheering me on. I couldn’t wait to see her see Israel for the very first time!

After a quick and easy bonus video shoot near the resort which sits on the Sea of Galilee, or Lake Kinneret as it’s known in Israel, we made our way to Capernaum, just north of where we were staying. It was a gorgeous day, but a little windy. 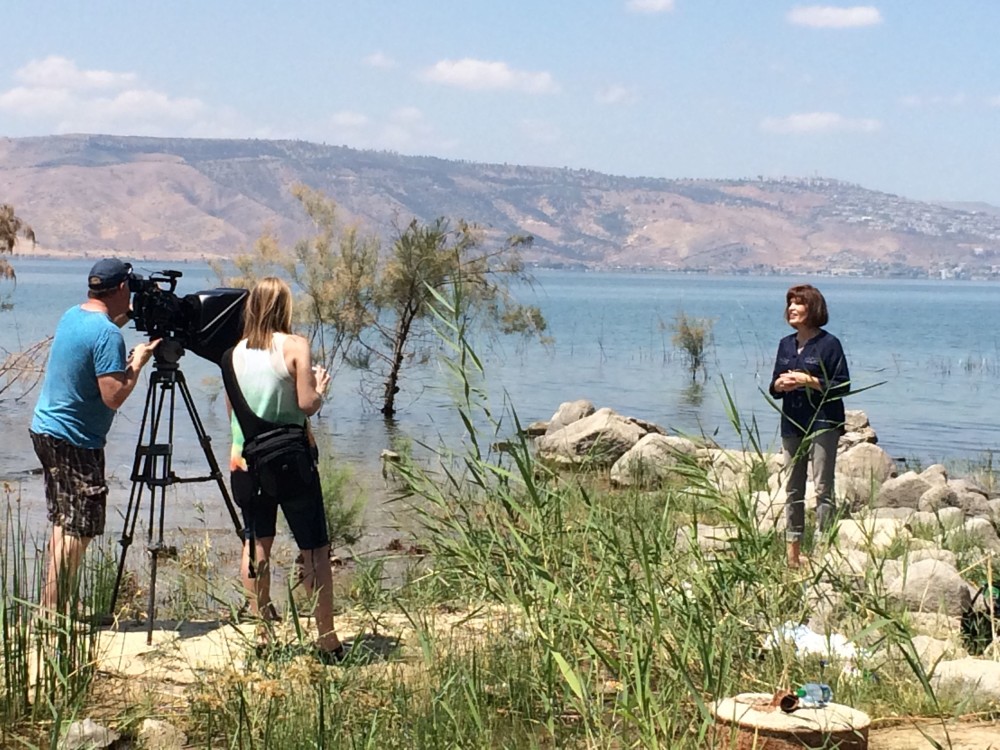 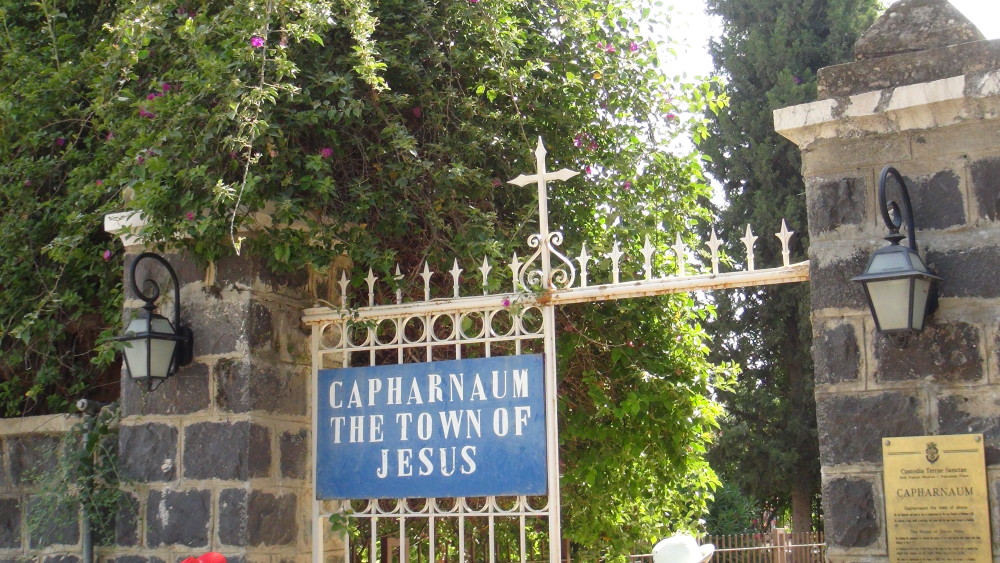 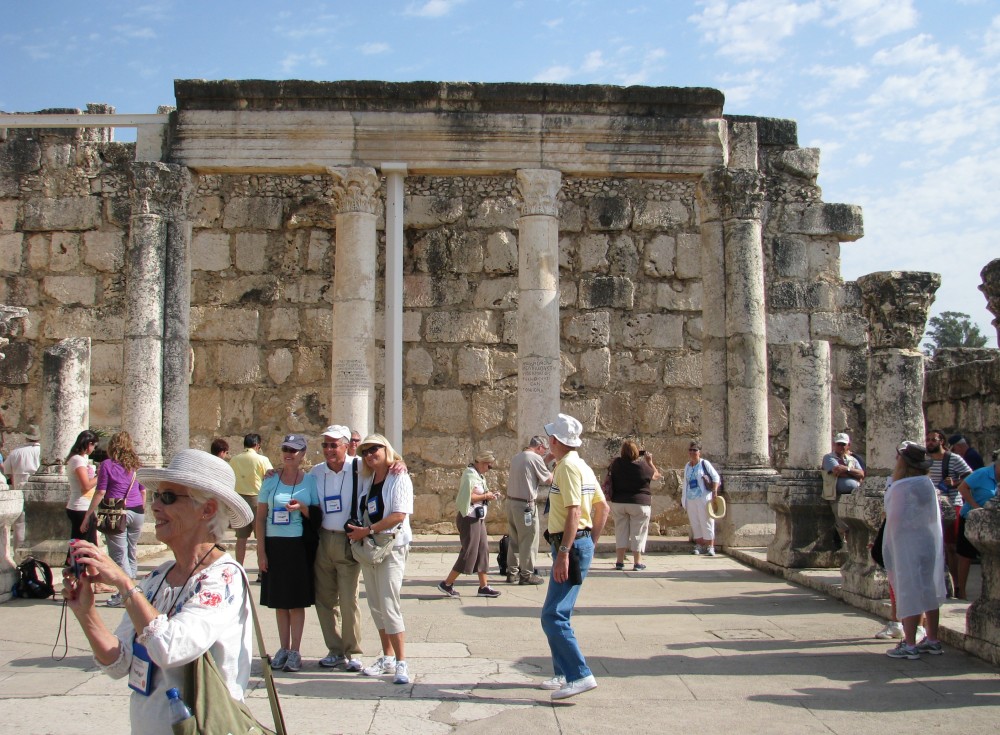 We set up the camera and reflector screen for the first shot, but it was tough to get clean audio with the wind. So we moved just inside the synagogue ruins. Unfortunately, large tour groups started arriving.

With the sun beating down, the wind picking up and the crowds growing thick, we finally had to move behind the wall of the synagogue in an attempt to get one clean take. But a few minutes into filming the battery pack on the camera died. That’s when we realized Kristie wasn’t with us.

Frank and I ran to check on Kristie and pick up a second battery. Kristie was feeling pretty miserable, so we prayed and I gave her a bottle of water and some aspirin. It wasn’t until we got back to the shoot site that I realized I’d lost the little plastic holder for the wireless microphone I was wearing.

A small thing you may say, but it is a crucial piece of equipment that pins the mic in place under clothing. I ran back to the van scouring every inch of ground. Once again, things weren’t going nearly as smoothly as we’d hoped. As smoothly as we’d prayed.

Though I found the mic holder, it became clear that the day was pretty much a bust. It wasn’t just the wind or crowd or battery issue. The script I’d written for the session was way too long and way too wordy. I needed to make drastic cuts. Not just on this session, but on every session I’d written.

It was a difficult day to say the least. There would be no do-overs – we had to get to Jerusalem that night. What we had was all we had. Thankfully Frank had taken extra B-roll footage in case the session required a reshoot. 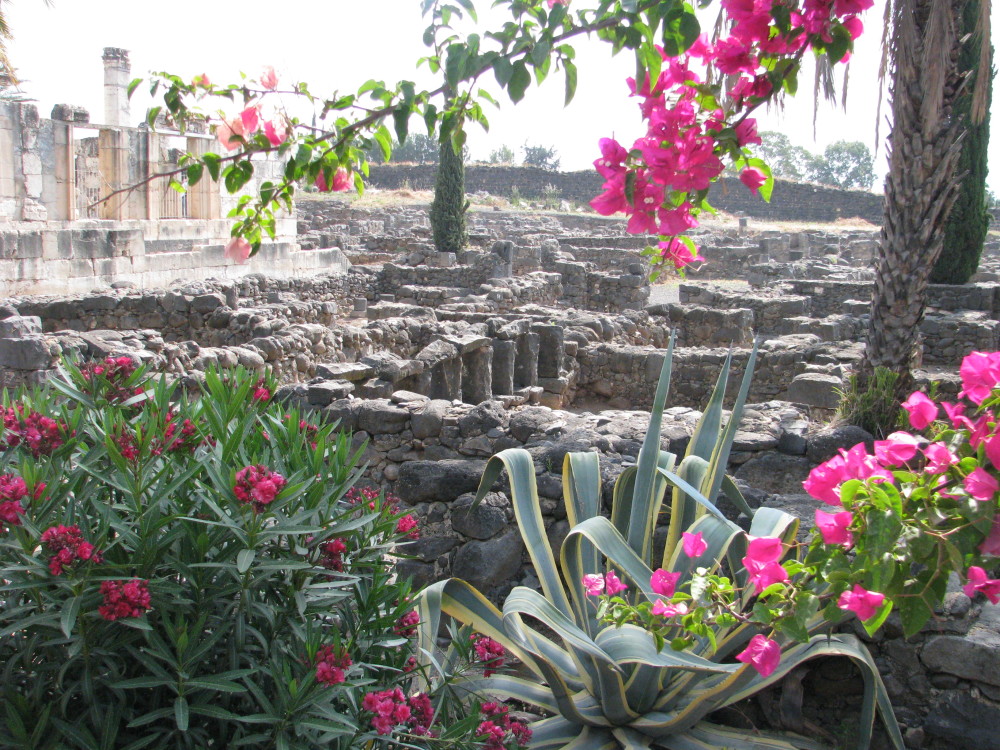 As we drove towards Jerusalem, I whispered a fresh prayer of relinquishment, determining not to be anxious about another lost day of filming. I especially had to fight against my tendency to beat myself up about the messed up scripts. Instead, the Lord helped me to put the day’s incompleteness into His hands, choosing to trust that He would finish what we could not.

In Philippians 1:6, Paul writes: “Being confident of this, that he who began a good work in you will carry it on to completion until the day of Christ Jesus.”
What “good work” do you need to entrust to God today? May I suggest that it isn’t your perfection God needs as much as your partnership. You bring what you have and He will provide the rest. That’s how the Holy Spirit miraculously completes His work in you and me.

I’d love to hear from you…
How do you turn your attitude around during a terrible-not-so-good-day?
If you truly believed God was at work in you and for you, what would change?