We’d been warned to leave the city.

Independence Day in Jerusalem is crazy, we were told. The traffic is terrible and the crowds dense. Go anywhere but near the Old City, we were advised.

But with a lost day of shooting and an increasingly tight schedule, we had to shoot in Jerusalem. Going to Bethany, our only other option, wasn’t wise with political tensions extra high on this particular day.

So we settled into the van as our driver made his way through the narrow streets toward Jerusalem’s Dung Gate, the main entrance to the Western Wall, Temple Mount and the Archaeological Park where we’d be filming that day.

Located to the right of the Western Wall, the park is filled with impressive finds uncovered in excavations which began in the 1990s. It includes part of the Robinson Arch which once led to the Temple Mount as well as ritual baths, cisterns, residential houses and fortifications. On the southern side they also found an impressive and largely intact flight of stairs that once led up to the Temple’s two Huldah gates. 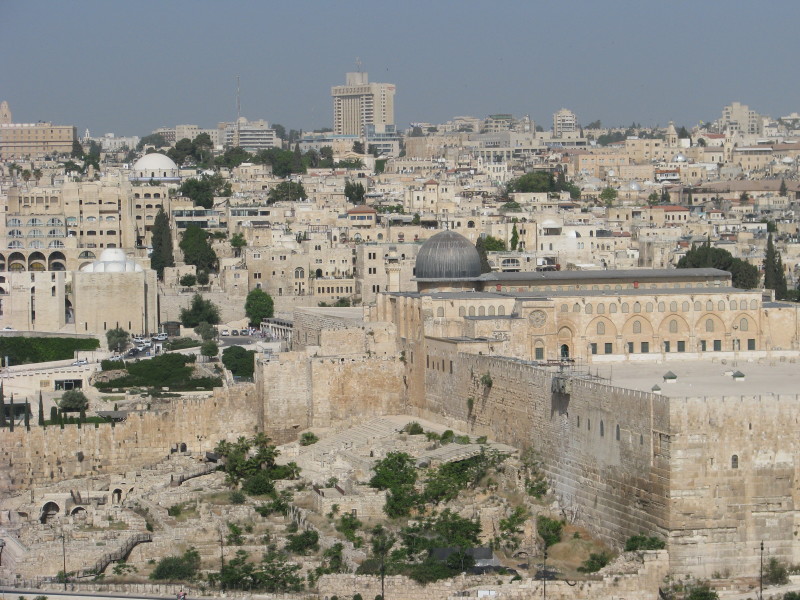 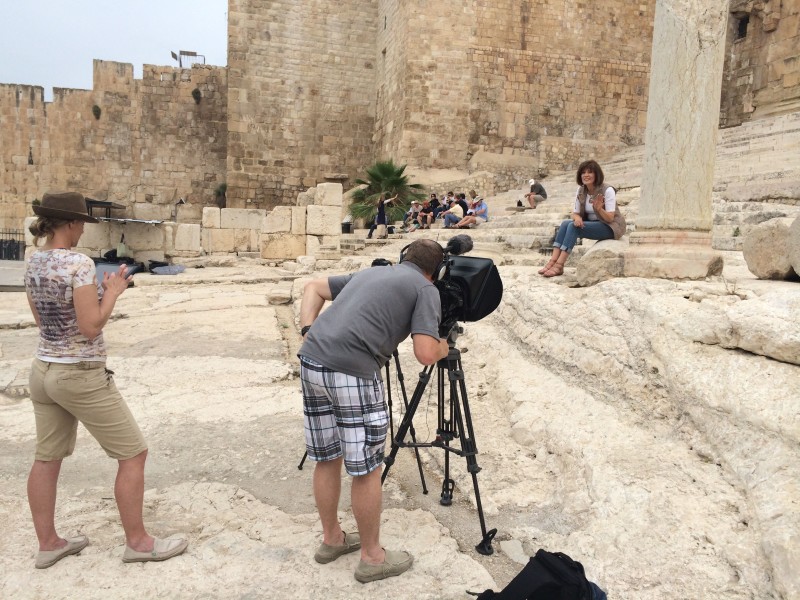 We arrived as early as possible to beat the crowds because we had a lot of filming to do. But surprisingly, the crowds were light. Perhaps all the tour groups received the same warning we did, but they heeded it!

Whatever the reason, it was the easiest shoot day thus far. The sun shone bright above but the temperature was moderate as a light breeze kept us comfortable.

After filming near the Robinson Arch where giant stones still remain after being thrown down during the destruction of the Temple in 70 A.D. we made our way to my favorite spot of all.

The Southern Steps of the Temple. During my first trip to Israel, the Lord used to birth one of the key analogies for the Lazarus Awakening DVD Study (Session Three: Friendship with God). As I stood on the steps getting ready to film, I found a scribbled note I’d written in my Bible’s margin the year before. 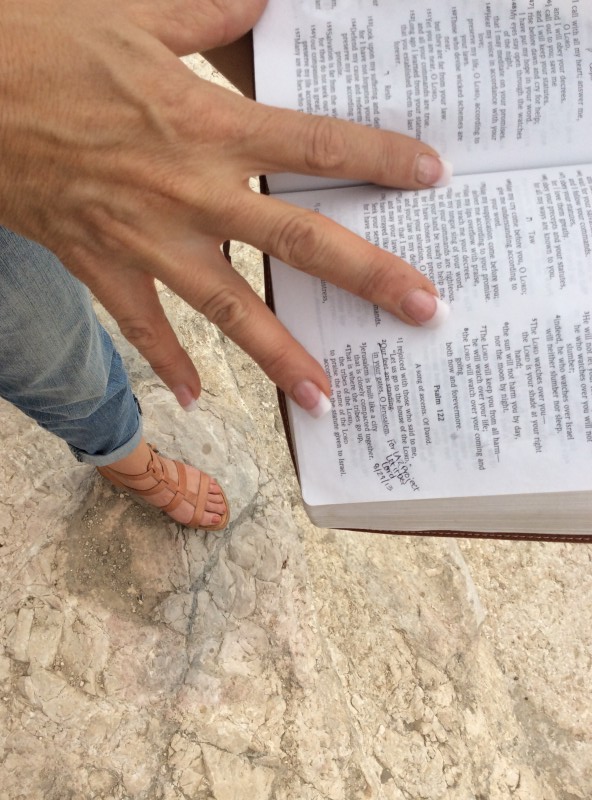 As groups came into the area where we were filming, we did our best to step aside and allow them to have their moment. (I love that about Frank! He is so aware and courteous of those affected by his filming.)

Of course, with all the equipment, it was pretty obvious we were up to something unusual. When a lady asked Mikki, our Israel hostess, what we were doing, she explained the study, and showed her my book.

Amber and I were synching the next segment on our IPads when Kristie brought the lady over, excited to meet me. Nancy Speer was from First Christian Church of Columbus, Indiana. She shared how much Having a Mary Heart in a Martha World had meant to her, but then she called over more ladies from her tour group because they’d done the study as well!

I’m telling you, we had a moment!

To meet a Bible study group in Jerusalem who’d done one of my books while I was filming a study I prayed the Lord would use in lives of women just like them… Well, it was a sweet God-kiss I will never forget! 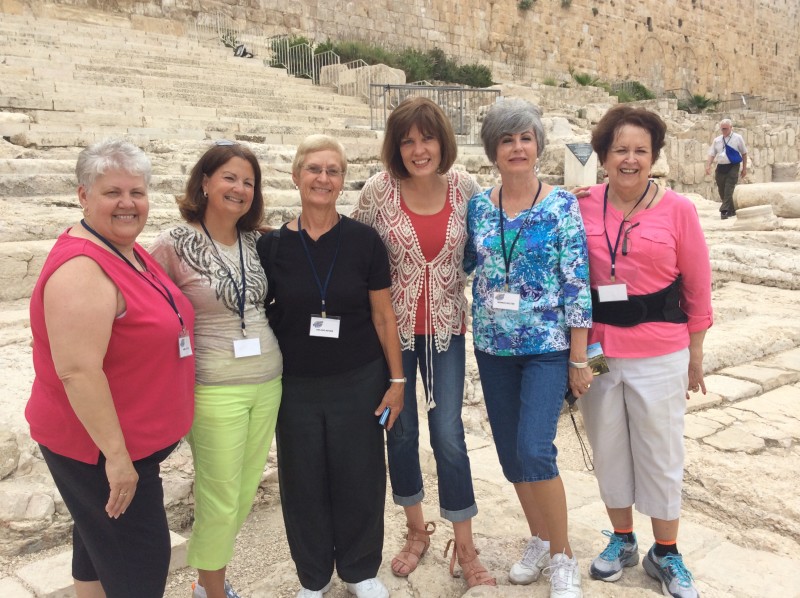 After hugging the girls goodbye, we realized that we had time to reshoot the session we’d lost in Capernaum. Wind noise and lack of clean run-throughs had made the footage unusable. Frank would insert B-roll into this new retake. It was the best we could do.

Now, looking at the finished product, I think it came together really well. God is so faithful to give us what we need, isn’t He? When “Plan A” doesn’t work out – He provides B-roll and turns it all for our good!

From the Heights to the Pit

After wrapping up afternoon at the Ophel Archaeological Park, we made our way to St. Peter of Gallicantu, a beautiful church built to commemorate Caiaphas’ House, the high priest at the time of Jesus. We were given permission to film there after hours – another unexpected blessing in a day of unexpected bliss. 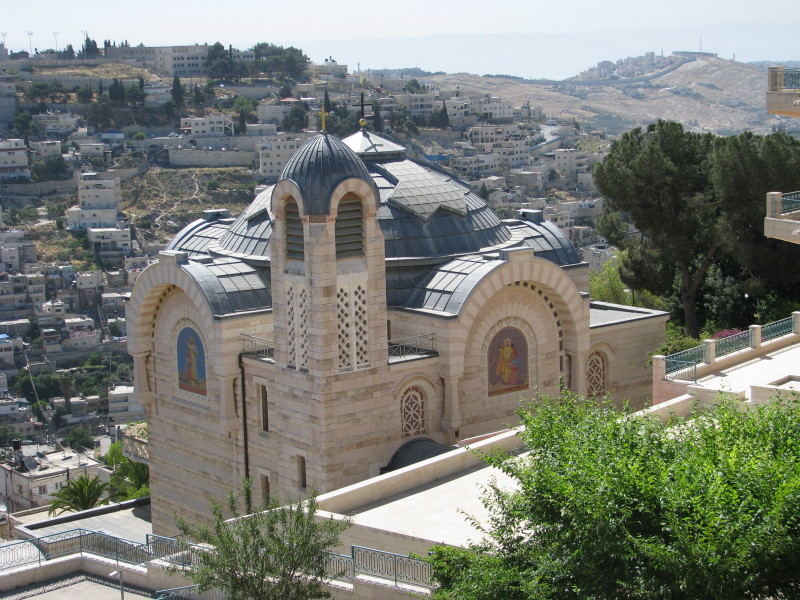 Tradition says that Jesus was brought to this place the night of His arrest in Gethsemane which is located across the Kidron Valley on the Mount of Olives.

While many scholars disagree, it is fascinating to think of Jesus being led down the dark valley, then up the hill and first-century steps outside the church to the place where He’d be tried and most probably, imprisoned afterwards. Whether this is the location or not, it isn’t hard to imagine Jesus spending His last night on earth in a pit much like the cisterns that lay beneath the church.

As we set up to film in one of those dark caverns, I couldn’t help but contrast the journey we’d just made. Thirty minutes before, we’d been on the steps of the Temple – a place where Jesus may have preached and the spot where many believe three thousand people were saved and baptized on the Day of Pentecost.

Now just a short time later we found ourselves in a pit, surrounded by cold earthen walls and darkness, setting up extra lights in order to film.

From the bright pinnacle of popularity to the dark pit of betrayal. Jesus has experienced it all. No matter what you are going through today, remember this, my friend…

“For we do not have a high priest who is unable to sympathize with our weaknesses, but we have one who has been tempted in every way, just as we are — yet was without sin. Let us then approach the throne of grace with confidence, so that we may receive mercy and find grace to help us in our time of need” (Hebrews 4:15-16).

You may be experiencing a season of mountain-top blessing or perhaps you’re walking through a pit-deep period of suffering. No matter what you’re going through, I can promise you this…Jesus understands.

You are not alone. He is with you, and He’s holding your hand.

What lessons are you learning in your current season?

What does it mean to know that Jesus understands?