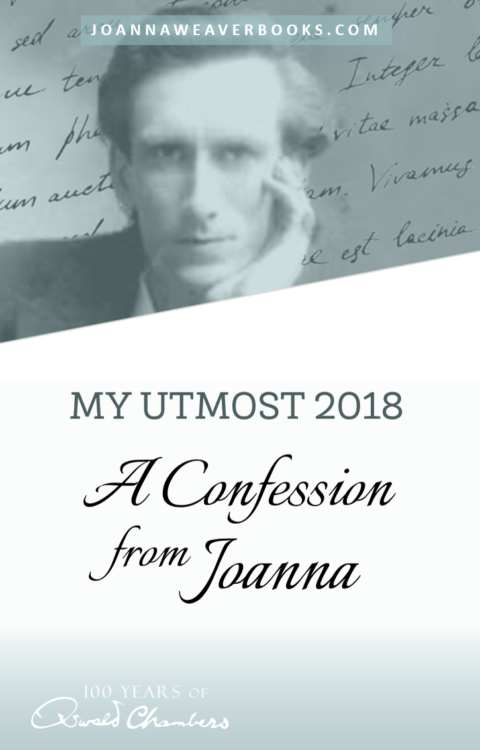 As we start this year with Oswald, I think it’s important to admit a few things up front…

First of all, Oswald Chambers is deep and there are a lot of times where I simply don’t get what he’s saying.

Just what is the “retired sphere of the leasts” anyway? (My Umost for His Highest – April 19)

I find myself having to read and re-read entries at times. Really focusing on the words and the meaning behind the words in order to grasp the message Chambers wants to convey.

I’ve always thought that was due to the British-turn-of-the-century tone the book is written in. After all, the devotions found in this book were first spoken messages preached back in 1911-1915 at the Bible Training College in Clapham, England as well as others preached from 1915-1917 at the Y.M.C.A. outpost in Zeitoun, Egypt.

But the large, challenging words and concepts Chamber’s uses may have more purpose behind them than simply being a manner of speech. 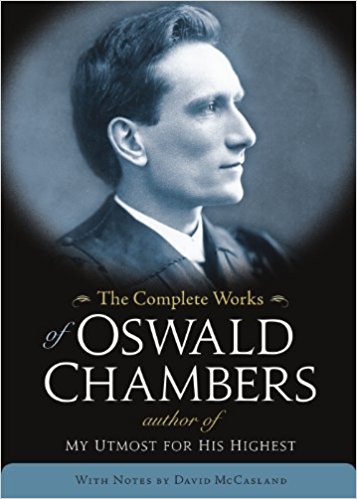 In the introduction to The Complete Works of Oswald Chambers, we’re told that Oswald encouraged his students to read and study with a dictionary at hand. “Never intend to look up a word,” he said. “Do it now.”

The publisher writes, “in the spirit of Chambers and his philosophy of education, we have not robbed the reader of the opportunity to learn by personal effort.”

Well, to be honest, such personal effort can be exhausting in this instant-I-want-it-now world in which we live. It is often easier to give up and move to “lighter” reading, which I’ve done myself. But God keeps bringing me back to Oswald and other Christian writers like him because He wants to expand my spiritual vocabulary – to challenge me in my thinking so that I can better articulate my faith.

For as you and I learn to THINK biblically, we will begin to LIVE biblically – daily walking out our faith in a way that more accurately reflects our Savior rather than the pale imitation many Christians often settle for.

Please know, however, that doesn’t mean that your devotions should be a daily struggle. Instead of trying to understand every word and every nuance, ask the Holy Spirit to speak to you as He wishes.

Most days (for me) it isn’t an entire devotion that speaks to me but simply a phrase. A sentence or a paragraph that lifts off the page and imprints itself on my soul. Or a new twist on an old truth that challenges me to stop and think about something in a way I’ve never considered before.

Bottom line, I’ve learned not to worry about what I don’t understand (or what doesn’t particularly “speak” to me) and focus on what does. As I prayerfully take that portion to the Lord, He’s used Oswald’s devotions to take me to a deeper level in Him. And that’s what it’s really about.

Which brings me to the second thing I want to emphasize – Oswald Chambers, as wise and spiritually influential as he was, is only a man. He never intended that we focus on his words but on the message of Christ he proclaimed.

So as you read the daily entries and the assigned chapter from the Bible, tune your heart to the voice of the Spirit. The Lord will speak the truth you need to hear, in words you can understand.

Even if it requires a little work on your part and mine.

Resources for My Utmost 2018

I’m so excited to have over a thousand people joining us for MY UTMOST 2018 Bible and Devotional Reading Challenge!

If you’d like to be a part, sign up for your FREE Bible Reading Journal in the box below. You can join the conversation on Facebook – just “follow” or “friend” me there to be certain you receive notifications.

Get Your FREE Journal!

Filled with practical tips and space to record time in God's Word, the MY UTMOST Journal also has room for devotional reflections.

Success! Now check your email to confirm your subscription.

But good news for those of you not on Facebook! Join the conversation by leaving COMMENTS each Wednesday right here at the BLOG. Just share a short quote from one of that week’s entries, and what it spoke to you. 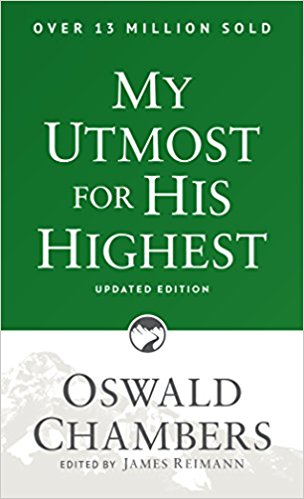 If you don’t have a copy of My Utmost for His Highest, you can read the daily devotional online HERE. But I highly recommend picking up a hard copy that you can underline and make your own. For those who struggle with the old language, good news! There’s an updated version as well.

The wording is very similar, except when phrases or words are less than clear in modern vernacular.

For instance…remember the “retired spheres of the leasts” phrase I mentioned at the opening? It comes from this portion on April 19th:

“You have gone through the big crisis, now be alert over the least things; take into calculation the ‘retired sphere of the leasts.'”

Here’s how the updated language edition rewords it:

“You may have just victoriously gone through a great crisis, but now be alert about the things that may appear to be the least likely to tempt you.”

You can purchase either version at the following links:

[This post contains affiliate links which pay a small commission without costing you extra. The links above go to hardcover editions, but paperback versions are available as well – Classic and Updated.]

<<Read WEEK 2 – Do You Have Courage to Look Within?

I’d love to hear from you…Which edition are you reading from? What has spoken most to you so far?