Having a Mary Heart in a Martha World

With her fresh approach to the familiar Bible story, Joanna Weaver shows how all of us — Marys and Marthas alike — can draw closer to our Lord: deepening our devotion, strengthening our service, and doing both with less stress and greater joy. 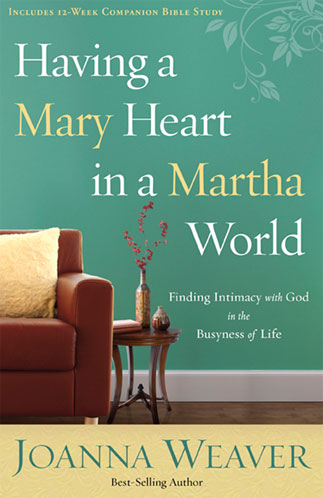 Order at these Retailers

About Having a Mary Heart in a Martha World

The life of a woman today isn’t really all that different from that of Mary and Martha in the New Testament. Like Mary, you long to sit at the Lord’s feet…but the daily demands of a busy world just won’t leave you alone. Like Martha, you love Jesus and really want to serve him…yet you struggle with weariness, resentment, and feelings of inadequacy.

Then comes Jesus, right into the midst of your busy Mary/Martha life – and he extends the same invitation he issued long ago to the two sisters of Bethany. Tenderly he invites you to choose “the better part” – a joyful life of “living-room” intimacy with him that flows naturally into “kitchen service” for him.

“Having read a couple of Joanna Weaver’s books in the past, so I knew this study would be great. Sure enough, it did not let our Bible study group down. We thoroughly enjoyed her teaching style and the workbook has great suggestions for growing as a Christian woman in this busy world full of so many distractions. Highly recommend this study!!”

“As a wife, mom to 7 and woman of many hats, Having a Mary Heart in a Martha World gently reminded me to draw close to Jesus, especially through crazy life circumstances.”

Speaker and Author of One More Step

“I had the privilege to teach Having a Mary Heart in a Martha World at my church’s Bible Study Group last year. After reading the book, I was so blessed that I couldn’t wait to share the things the Lord inspired in me. The videos add a lot to the experience and enable you to hear Joanna’s heart. It was a huge hit!”

It all began with the desire to write biblical fiction. I’ve always been fascinated by the story of Mary and Martha in Luke 10, but as I looked at the rest of their story found in John 11 and 12, I realized that there was much more than just a novel in these two sisters from Bethany.

As I began to outline the actual book, God reminded me of a retreat I had attended many years before whose theme was: “Having a Mary Heart in a Martha World.” The speaker never even mentioned Mary and Martha, but the theme stayed with me and resurfaced as I wrote the book.

I remember thinking, “Well, the book might stink, but what a great title!”

I had tried to find out the source of the title so I could get permission to use it, but no one seemed to know where it had come from.

Eight years after the book came out, I was speaking at a Nebraska women’s conference when one of the leadership team asked where I’d found the title. I told her my story. Then Candy Arrington told me a story of her own.

“About fifteen years ago I was asked to be the women’s ministries director for our state,” Candy said. “But I argued with the Lord, telling Him that they needed a Mary for this position and I was way too much of a Martha.”

“The Lord seemed to agree,” Candy told me with a smile. But then He whispered something to her spirit she would never forget.

“Yes, you are a Martha. But I want you to do this with a Mary Heart.” That phrase became her theme – Having a Mary Heart in a Martha World. She put it on her stationery and that stationery went around the country. Somehow, the phrase ended up on a list of suggested conference themes and I ended up at one of those conferences! The rest, as they say, is history. 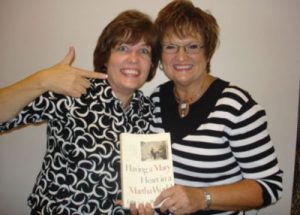 I can’t tell you how much it meant to meet Candy and be able to thank her for a phrase that has not only changed my life, but continues to impact the lives of women around the world.

But what really touched my heart was the fact God cared enough to bring us together all these years later, solving a mystery that had nagged for years in my mind.

Thanks again, Candy, for your gracious permission to continue using the phrase God used to expand your life and ministry as well as mine!