I’m always grateful for His blessings in my life – from beautiful sunsets to the feel of cool sheets on a soft bed to tickling my kids until we’re all breathless with laughter. But this last month and a half has been filled with so many God kisses, I’m nearly breathless with wonder. 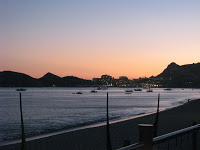 In the past month and a half, I’ve been privileged to speak internationally for the very first time. And in three different countries, if you can believe that! Okay, so the first country was Canada and only required a three-hour drive with my good friend, Kathy. But it involved a passport and two hundred incredible women from all around Lethbridge, Alberta. We had a blast!

Then, in mid-February, our entire family traveled to Los Cabos, Mexico, where my college roommate and dear friend, LuAnn Hill and her husband, Rod, arranged for us to stay in a beautiful condominium right on the ocean. Paradise! 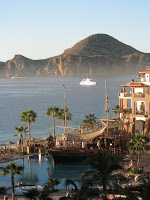 But even better than the crystal blue days filled with wave runners and whale watching, was the privilege of speaking to Rod and LuAnn’s church family at Los Cabos English Church. What an amazing group of people! John and I spoke at their Valentine’s Banquet, and then a week and a half later, I spoke at their first annual women’s conference. It was a beautiful time! Not to mention, delicious!

What incredible food! My diet kind of took a nose dive between the delicious fiesta we attended and the best steak taco stand in the world and my discovery of tortilla soup. I was sitting on the couch one evening and little Joshie patted my stomach.

From the mouth of babes. Thanks, Josh.