On day two, we headed out to the Mutianyu section of the Great Wall. A Shanghai friend had recommended a tour guide named Lucy, so she and her driver picked us up in a van and we began the 30-mile journey to the second most-visited part of the wall.

It was fun to see all the preparations being made for the Olympics as we drove through the city and out into the countryside. In an effort to diminish air pollution, Beijing has planted thousands and thousands of trees, but though we’d hoped the air would be clearer out in the countryside, when we reached the Wall the landscape was still painted with a wash of gray. But the magnificence of this amazing structure was very evident as we rode the tram up the mountainside to the wall. 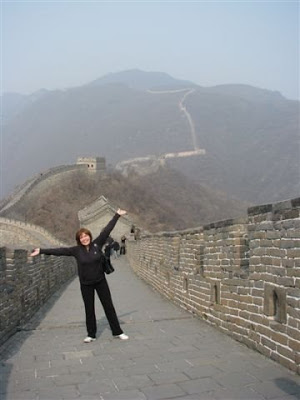 Considered one of the Seven Wonders of the World, the Great Wall once stretched over 4000 miles across China’s northern territory. Building began in 7th century B.C. and was meant to protect China from Mongolian invaders. The Great Wall was built in sections by different dynasties, requiring millions of laborers working off and on over a span of 1400 years. Most of the wall has fallen into disrepair, but several sections have been renovated and draw tourists from all over the world.

Popular legend says that the Great Wall is the only manmade structure that can be seen from space. While that isn’t true, it was an awe-inspiring experience to stand on the structure I’ve heard about since I was a little girl. Jessica and I shared a special mommy-and-me moment – a silly ritual we’ve done since she could toddle. I couldn’t help but smile as I twirled her along the sloping bricks. What an incredible privilege to be together on this amazing trip!