8 Secrets to Loving (and Doing!) Ministry Together 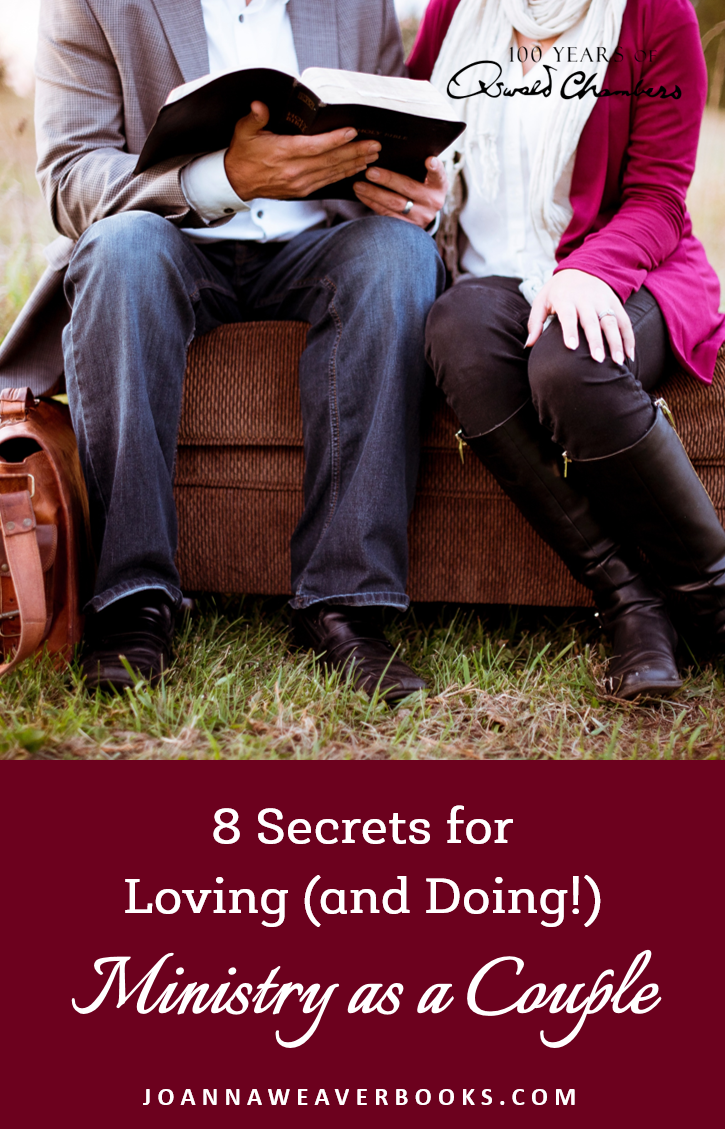 That was the beautiful secret of Oswald and Biddy Chamber’s lives and ministry.

To celebrate Valentine’s Day and the 100th anniversary of Oswald Chambers’ life, I thought it would be fun to share lessons we can glean from this amazing ministry couple.

But first, let me tell you a bit of my story…

When John and I got married and became youth pastors, I was certain God was going to do mighty things through our ministry.

After all, we both loved Jesus and wanted to build His Kingdom. Our hearts were in the right place, and it seemed like God had gifted us for our roles. (I played the piano and sang, for heaven’s sake!)

I was pretty sure we’d spend the rest of our lives in blessed ministry bliss – two people sharing one heart and one mind as they served Jesus.

Except that didn’t happen. Instead of perfect unity of heart and mind, it turned out we had two completely different perspectives – especially when it came to ministry.

I was visionary with all kinds of ideas of what we needed to do to be effective youth pastors. John, on the other hand, was practical and often skeptical of my glorious ideas.

As you can image, the two differing approaches rarely meshed, leaving us both frustrated and confused as to how a “marriage made in heaven” could feel like a continual wrestling match here on earth – especially when it came to ministry.

Becoming “one flesh” is never easy in marriage or in ministry. Especially when sinful flesh is involved.

Gratefully, the Lord walked us through those difficult early years. Shaping and honing each of us into more accepting, more loving individuals. As we learned to release one another from our expectations, God began to build the couple He’d always had in mind.

8 Secrets to Loving (and Doing!) Ministry Together

When I first read Michelle Ule’s book, Mrs. Oswald Chambers, I was struck by the beautiful partnership Biddy and Oswald shared.

(Learn more about their amazing story by clicking on links in my post below.)

Though married only seven years before Oswald Chambers died, the way this couple did ministry still inspires today. Here are eight qualities I see in their example…eight things I want to emulate:

From the beginning, Oswald made it clear that marriage to him would mean “going heart and soul into literary and itinerating work for [God]. It will be hard and glorious and arduous.”

But Biddy was up to the task. Though she had once dreamed of being the first female secretary to the Prime Minister of England, there was now a higher calling. To work beside Oswald – to be his “helpmeet” as they made themselves available to God – willing to do and go wherever He asked. 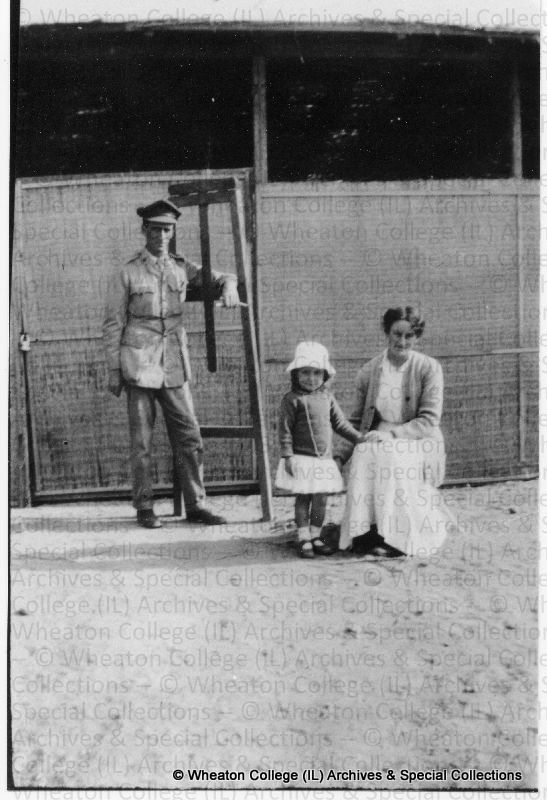 I can’t imagine what Biddy must have thought when her husband asked her  to join him at a British Army outpost in Egypt in 1915 – and to bring their two-year-old daughter, Kathleen, with her.

The heat and sand were unbearable at times, but Biddy made the best of it.

Though as Michelle Ule points out, she basically “camped” for four years in the Egyptian desert, somehow, she created a welcoming home for both her family and the hundreds of servicemen around them. 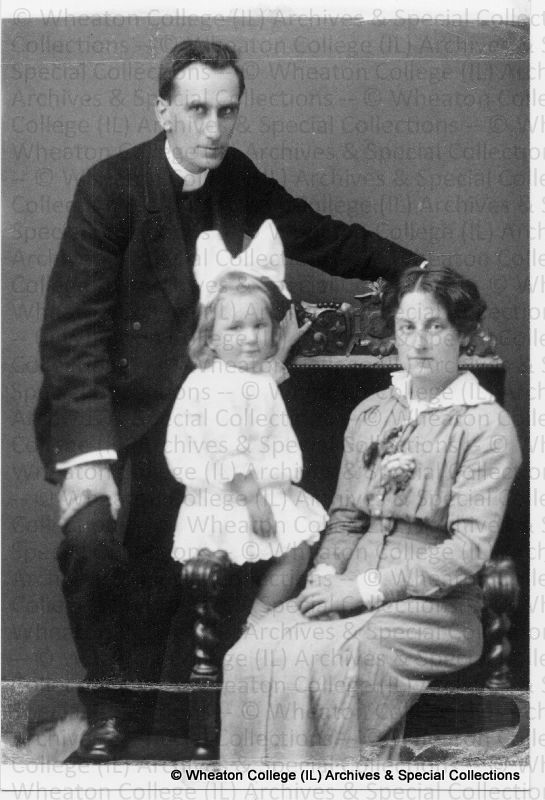 3. Include your children in the ministry

Rather than sheltering Kathleen, their daughter,  Oswald and Biddy involved her in the ministry. The little girl brought much joy to the soldiers, and to Oswald himself.

Very involved in his daughter’s life, he often took  her as he made his rounds. But he also found ways to bring his little girl delight, such as a visit to a hair salon in Cairo or a sweet shop for ice cream.

One photo shows Kathleen riding a camel with her father, the pyramids behind them.

4. Use your gifts for God’s purposes – together and separately

As Oswald taught and mentored the soldiers, Biddy worked beside him as she always had, capturing his lectures with her 250-word-a-minute shorthand.

The skills she’d acquired at their ministry school in England brought order to their ministry in Egypt. Her homemaking skills created a haven for the soldiers.

She regularly provided tea and a little taste of home for these men so far removed from their own families.

5. Don’t take each other for granted

Oswald understood the sacrifice Biddy made to be with him, and watched for ways to make her life easier. He insisted that she lay down each afternoon when he visited the wounded.

He knew it was a difficult life. “I am unfathomably thankful,” Oswald told her in a note, “to you and to God again with the leisure that I may be broken bread and poured out wine for the multitude. This means sacrifice for you, not in glorious ways but … the hardest ways.”

Oswald Chambers died November 15, 1917, of complications from an appendectomy.  He had struggled with poor health throughout the fall. Though Biddy must have wrestled with many questions, especially since she felt God had promised, “this sickness is not unto death,” she received the news as Oswald had always advised…

To see God in the haphazard things of life. For “it is God who engineers circumstances” (My Utmost – June 3).

“God has released OC from his task,” Biddy said after his death, “but he did not release me from mine.” She remained in Egypt teaching the soldiers for awhile, but it soon became clear that her task was to capture Oswald’s teachings and put it in book form.

7. Don’t use ministry for personal gain

After Biddy and Kathleen returned to England, she worked tirelessly throughout her 49 years of widowhood to produce thirty books of Oswald’s teaching as well as My Utmost for His Highest devotional – a book that has never gone out of print.

Though they had little income, Biddy refused to take any compensation for her work, choosing instead to put any profits back into the printing of more books. God was faithful to take care of the two, though it was difficult at time. 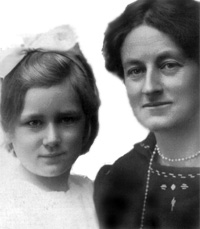 8. Trust God with everything

No matter what touched her life, Biddy kept her faith strong. When a warehouse filled with Oswald’s books burned to the ground uninsured in World War II, Biddy left the matter in God’s hands. If He wanted the work to continue, He would make a way.

Kathleen once said of her mother’s unflappable faith: “All my life my mother…never for half a second questioned what God allowed to happen, ever. She might have been puzzled, but was unperturbed and never desperate.”

So Much to Chew On

I don’t know about you, but Biddy Chambers’ faith astounds me. Her willingness to continue Oswald’s ministry inspires me.

The joy of ministry can get lost in the struggle of life at times. But if we’ll live with arms wide open like Oswald and Biddy did, willing to embrace the call of God no matter what He asks, He will take our lives and use them. Pouring Himself into us as we pour out our lives for Him.

But we must stay connected to the Source. The secret to Biddy’s “nonplussed reactions” to difficulties , Michelle Ule says, lays in her daily quiet time with God. But it was also shaped by questions Oswald presented during the “spiritual surgery” hour at the Bible college they served earlier in ministry:

These are good questions. Questions we need to ask in our marriage as well as our ministry.

Lord, help me be willing to lay down my life for John and for the people you’ve placed in our care. May we love and live as unselfishly as fearlessly as Oswald and Biddy did. For Your Eternal purposes. Your Kingdom come. Your will be done. In us. Through us.

Soli Deo Gloria. To You and for You alone.

Are you a ministry woman or Bible study leader?

Get an inside look at Joanna's books and DVD studies - and get a FREE devotional!

Thanks for Success! Now check your email to confirm your subscription.

Read WEEK 8 – “Living Beyond the Well of Our Own Incompleteness” >>

I’d love to hear from you…Which “secret” do you want the Lord’s help to work into your life and ministry?