Allowing God to Defend Us

Nothing is harder than injustice…

VERSE: “I tell you not to resist an evil person. But whoever slaps you on your right cheek, turn the other to him also.” Matthew 5:39

OSWALD: “These verses reveal the humiliation of being a Christian. In the natural realm, if a person does not hit back, it is because he is a coward. But in the spiritual realm, it is the very evidence of the Son of God in him if he does not hit back. When you are insulted, you must not only not resent it, but you must make it an opportunity to exhibit the Son of God in your life.” –  (My Utmost for His Highest, July 14th)

It happened again a few weeks ago. I got my feelings hurt. I wasn’t treated right and so, an opportunity to be offended presented itself. Like usual, a rush of legitimate indignation immediately rose up.

Gratefully, I didn’t hop on the poor-poor-pitiful-me bandwagon I usually travel on. Instead, I stopped and asked God to help me think differently about the situation.

Because you see, I’m discovering that it isn’t people and situations that make us angry. It’s how we think about them.

When something unjust happens, our brain goes wild, trying to figure out why it happened. Trying to protect ourselves. To set people straight. We start questioning people’s motives and intents, turning the situation over and over in our minds in an attempt to make it make sense.

Anger begins to grow at the injustice of it all, causing us to rush to judgment rather than run to mercy.

Unfortunately, that kind of thinking rarely helps. Rather than believing the best about people, we begin to assume the worst. We wallow in self-justification while simultaneously villain-izing the person on the other side.

God’s been teaching me that I don’t have to take that path – and let me tell you, it’s been refreshing! As I’ve refused to nurse and rehearse my hurt, the Lord is helping me disperse the hurt. Rather than casting myself as the victim and making enemies of my friends, I’m learning that I can stop the thought and refuse to go there in my head.

I can’t say I’m always victorious in this important mental battle, but I want to be. Because, as we learn in today’s entry:

A personal insult becomes an opportunity for a saint to reveal the incredible sweetness of the Lord Jesus. - #OswaldChambers #MyUtmost Click To Tweet

But taking advantage of the opportunity doesn’t happen naturally. We need the Holy Spirit to help us exercise such restraint.

Years ago, when struggling with a personal injustice, I was touched deeply by an entry from Stephen Merritt in the classic devotional Springs in the Valley. It’s  especially helpful for those of us who tend to verbally defend ourselves when wronged or attacked, helping us act like Jesus did, who when mistreated, “answered…never a word” (Matthew 27:14):

Not railing for railing; not a word. How much is lost by a word! Be still! Keep quiet! If they smite you on one cheek turn the other also. Never retort! Hush – not a word!

Never mind your reputation or your character; they are in His hands; you mar them by trying to retain them.

… Are you misunderstood? Never mind! Will it hurt your influence and weaken your power for good? Leave it to Him – His to take care and take charge.

Are you wronged and your good name tarnished? All right! Be it yours to be meek and lowly; simple and gentle – not a word! Let Him keep you in perfect peace; stay your mind on Him; trust in Him.

Not a word of argument, debate, or controversy. Mind your own business. Be still!

Never judge, condemn, arraign, censure. Not a word! Never a disparaging remark of another. As ye would others should do to you, so do ye.

Pause! Be still! Selah! Not a word, emphatically; not even a look that will mar the sweet serenity of the soul. Get still! Know God! Keep silence before Him!

Stillness is better than noise.

Stephen Merritt – Springs in the Valley

Such stillness is easier said than done, I know. It’s completely opposite of our instinctive reflex to fight or flight. Often, the first thing we do when accused or mistreated is to lash back with the most convenient weapon at hand. Our tongue. But the discipline of our words is crucial if we want to be like Jesus.

For “when words are many, sin is not absent,” Proverbs 10:19 reminds us, “but he who holds his tongue is wise.”

When all is said and done, it’s better to let God defend us, than insist on defending ourselves. 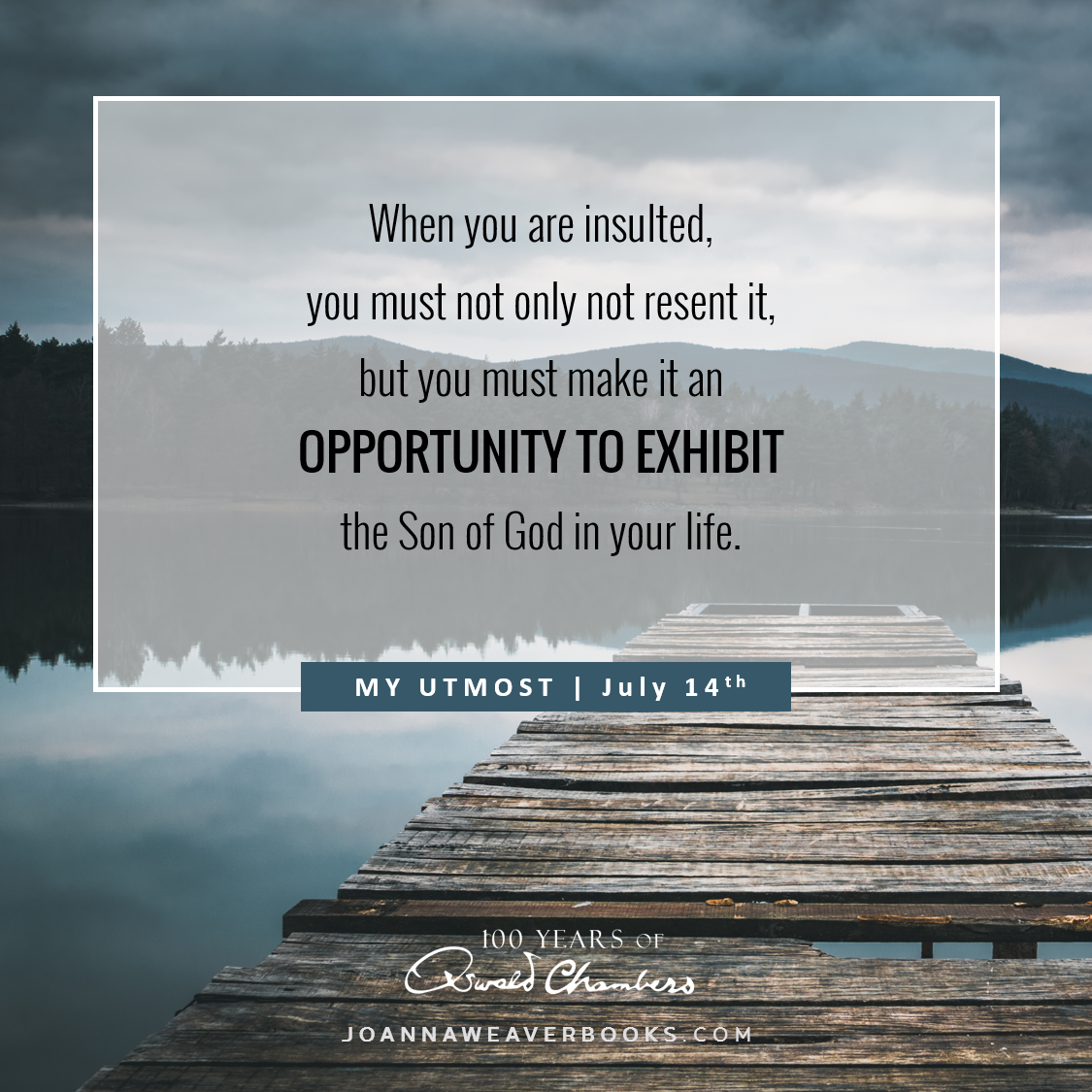 I’d love to hear from you…How do you remain still when injustice strikes?